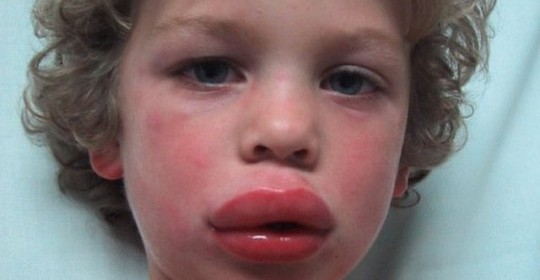 Anaphylaxis is a serious, potentially life-threatening allergic response that is marked by swelling, hives, lowered blood pressure, and dilated blood vessels. In severe cases, a person will go into shock. If anaphylactic shock isn’t treated immediately, it can be fatal.

This condition occurs when the immune system develops a specific allergen fighting antibody (called immunoglobulin E or IgE) that drives an inappropriate or exaggerated reaction toward a substance that is normally harmless, such as food. Your body may not react upon initial exposure but may produce antibodies with later exposures. When you are exposed to the substance later, the binding of the allergen to antibodies can lead to the presence of a large amount of a substance called histamine, which can then lead to the symptoms described above.

What Are the Symptoms of Anaphylaxis?

Anaphylaxis may begin with severe itching of the eyes or face and, within minutes, progress to more serious symptoms. These symptoms include swallowing and breathing difficulties, abdominal pain, cramps, vomiting, diarrhea, hives, and angioedema (swelling similar to hives, but the swelling is beneath the skin instead of on the surface).

If you have anaphylaxis, seek emergency medical attention immediately. The condition can quickly result in an increased heart rate, sudden weakness, a drop in blood pressure, shock, and ultimately unconsciousness and death.

What Are the Common Triggers of Anaphylaxis?

Some substances can cause reactions — called anaphylactoid reactions — that are similar to and just as serious as anaphylaxis, but do not involve immunoglobulin E antibodies. The most common triggers include iodine-containing dyes that can be seen on X-rays, aspirin, nonsteroidal anti-inflammatory drugs (NSAIDs) like Advil, opioids, blood transfusions, and exercise

Anaphylaxis is diagnosed based on its symptoms. People with a history of allergic reactions may be at greater risk for developing a severe reaction in the future. Skin testing may help confirm the substances that cause severe allergic reactions.

What Is the Treatment for Anaphylaxis?

There is only one rapidly effective treatment for anaphylaxis — epinephrine by injection. Epinephrine is adrenaline and it rapidly reverses anaphylactic symptoms. It is typically given through an automatic injection device. The most common and most effective injection site is the thigh.

If you are near someone who is going into anaphylactic shock, call for professional medical help immediately. CPR and other lifesaving measures may be required.

In addition to epinephrine, treatment for shock includes intravenous fluids and medicines that support the actions of the heart and circulatory system. After a person in shock is stabilized, antihistamines and steroids may be given to further reduce symptoms.

How Can I Be Prepared for Anaphylaxis?

If you are allergic to bee stings or any other substances that cause anaphylaxis, you should always be prepared. Ask your doctor to prescribe an epinephrine injection kit and carry two with you at all times. It is also important to note that avoidance is the foundation and first step to preventing allergic reactions. Be sure to educate yourself on how to recognize and avoid potential triggers.

Also, it’s important that you inform your health care provider of any drug allergies before undergoing any type of medical treatment, including dental care.

It is also a good idea to wear a medical alert bracelet or pendant, or carry a card that identifies your allergy. In cases of emergency, it could save your life.

You can find out more about which cookies we are using or switch them off in settings.

Athens Allergy supports the Kids of Earth, the NGO that cares and supports children from all over the world. Read more or Donate Now

This website uses cookies so that we can provide you with the best user experience possible. Cookie information is stored in your browser and performs functions such as recognising you when you return to our website and helping our team to understand which sections of the website you find most interesting and useful.

Strictly Necessary Cookie should be enabled at all times so that we can save your preferences for cookie settings.

If you disable this cookie, we will not be able to save your preferences. This means that every time you visit this website you will need to enable or disable cookies again.

This website uses Google Analytics to collect anonymous information such as the number of visitors to the site, and the most popular pages.

Please enable Strictly Necessary Cookies first so that we can save your preferences!